Wilson Sporting Goods Names Us 2018 Dealer of the Year 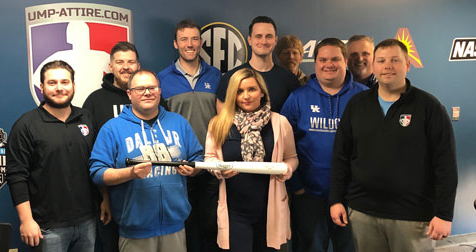 Wilson Sporting Goods names Ump-Attire.com as their 2018 Sporting Goods Dealer of the Year in their baseball/softball category. Wilson gives the annual award in each of their 4 U.S. regions.

This marks the first time an umpire-specific retailer was recognized among all of Wilson’s baseball/softball retailers.

“We are excited to honor Ump-Attire.com for our region and 1 of only 4 baseball/softball dealers across the country in 2018. They are great partners who truly go about connecting with the consumer and servicing the business the right way!”

"We greatly value our relationship with Wilson and are honored to be named as their dealer of year. Their high-quality products and our world-class service combine to make a winning team for the umpiring community.”

Ump-Attire.com is the leading retailer of Wilson Umpire Gear. Wilson Sporting Goods, based out of Chicago, Illinois is the Official Supplier to MLB Umpires and a leading provider of umpire gear worldwide at all levels.

I took a hard hit to upper chest with a protector that lacked the hard shell and felt it for weeks. Immediately ordered this protector as a replacement and have been super satisfied. It fits well and gives me the protection and confidence I need behind the plate. I recommend this chest protector without hesitation.

It is amazing. I really like this one as the fit is a lot tighter and the band is thicker than what I had previously. Full recommended.