We are excited to announce the addition of Josh Mann to the Ump-Attire.com team as our Marketing Assistant. His unique business and officiating background will make him an important asset to our staff.

Despite his young age, Josh has not been afraid to travel and explore new opportunities. A native of Chicago, he traveled to the University of Arizona where he completed a Bachelors Degree in General Studies of Economy and Industry and a Sports Management minor. As explained to me, "Tucson with its weather was the best place to go to school and to umpire". While there, he worked in the Arizona Community College Athletic Conference (ACCAC) and Tucson Baseball Umpire Association.

I first met Josh in 2013 in Vero Beach, Florida when he was a student at The Umpire School - now the Minor League Baseball Umpire Training Academy. While we were there serving as official supplier, I talked to Josh often about umpire equipment, uniforms, and other trends in the industry. How interesting it is to me now that we'll be doing that each day in his new role. (Add another pin on Josh's map in Daytona Beach where also attended the Wendlestedt Umpire School.) 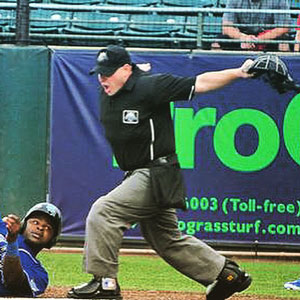 Josh's training eventually led him to new frontiers. He served in the Frontier Professional Baseball League as an umpire and then with the Chicago Cubs in Mesa, Arizona where he was responsible for game day operations, group ticket sales and facility tours at their spring training facility.

Josh and I renewed our umpire-gear-related conversation at a NCAA Umpire Clinic in Chicago this past January where we had a display. I learned that he was then serving as a supervisor for the highest-grossing Play It Again Sports franchise in America. I couldn't help but wonder "with your background, education and sense of adventure, would you ever consider working with us?"

You now know that answer, and I am excited that Josh, his skill set, adventurous ways and his dog Wrigley moved from Chicago to Louisville to join our crew.

Here, he'll be focused on all aspects of our growing E-Commerce business including sales, service, order fulfillment, inventory management, marketing and research. Welcome aboard Josh!