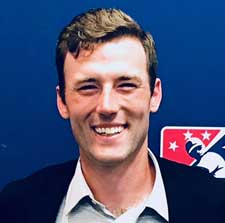 When Ty Unthank started as a warehouse crew member this fall, he was already registered to attend the MiLB Umpire Training Academy in 2018.

It is not unusual for us to have pro umpire school graduates on staff. We now have 3 - along with Brandon Lawson and Josh Mann. Unique to Ty was that he attended DURING his tenure with us. The others had attended BEFORE they came on board.

While Ty was not offered the opportunity to chase his dreams as a MLB umpire, we are selfishly glad to have him back after missing him for the duration of the 4-week course.

From here on out, when your package arrives on your doorstep, there is a good chance that Ty carefully put it together for you.

For more information about the MiLB Umpire Training Academy, where we have been a proud sponsor 7 years, visit their website: www.milbumpireacademy.com