Some of you are masters at taking off your Umpire mask with a longer 6-stitch cap on. We asked our Facebook followers and fellow umpires to share their tips and tricks so the rest of us can be too!  Here are their suggestions: 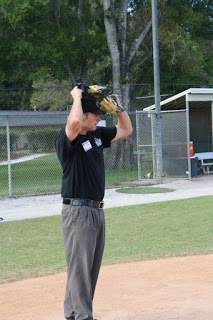 Scooter Morrison - Loose strap ... Out and up!

Arik Goldsmit - Agree with the above. If you are still having issues try using the top of the mask as a "hinge" against the top of your hat as you pull the bottom of the mask out and up.

Mark Yoder - Wear the mask very loosely -- to the point that it hangs off your face when you look at your highly polished shoes (if you don't have highly polished shoes, then you may has well pull off your hat with your mask and look like a complete dork rather than just a partial dork). then pull it away from your face and then up. 8-stitch is easy, too...

Manuel Garcia - I've always pulled the mask off from the back, grabbing the straps and sliding them over my hat that way they don't catch the bill.

Tommy Owens - Your mask should be loose anyway so it can move if hit. the rest is just technique development.

Lou Skip DeStefano - Grab middle of mask, pull out, lift up and tilt back. Practice!!!

Chaz Stodola - I wear an 8 stitch during the summer and a 6 during the college season, just make sure your hat is snug but not to the point to where its cutting off the circulation to your brain. Also make sure that your straps aren't extremely tight but not too loose either. When you pull your mask forward it should be adjusted to where your mask just clears your hat. And of course practice practice practice.

Daearl Kelly - Out and up it's natural at practice a little.a lot I've seen use just a thumb I think it's easier to use hand front of mask.

There you have it - whether you start from the front, back or middle - practice seems to be the key!

This mask is super lightweight. I will be changing the harness though.

Mask is definitely lighter in weight than my previous mask. I have yet to take a foul tip off it, but am pleased with the feel of it.

Awesome umpire mask!! It’s light and comfortable. Definitely have to get used to the memory foam as I have always used leather. But I’d definitely buy again!!