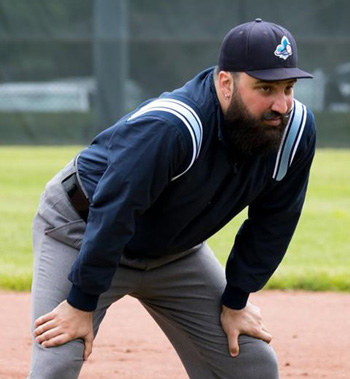 WHERE ARE YOU FROM?

"The suburbs of Montreal, QC, Canada"

WHEN/WHERE DID YOU START OFFICIATING?

"I took my first clinic (Level 1) in 2002 and began umpiring for my local association in Dollard-Des-Ormeaux, QC, in the suburbs of Montreal. In 2005 I joined the regional umpire program in Lac St-Louis. In recent years I've joined the provincial and national programs as well.

I became an official Baseball Canada Umpire Course Conductor in 2012 and have been teaching Level 1-2-3 clinics ever since.

I have also been very active as a volunteer in different roles around the province over the last nine years."

WHICH SPORTS DO YOU OFFICIATE?

"Baseball. I know Canadians have a stereotype for being all about hockey and igloos, but not this guy!"

HIGHLIGHT OF YOUR CAREER?

"Last season I made my debut in our province's top Elite amateur leagues, the LBJEQ and LBMQ.

As far as championship performance: plate on a semi-final provincial championship game last year. A 3-umpire crew with one of my close baseball friends, Adam, on 1st base. 1h15m game, 1-0 score, and we NAILED our sole rotation of the game: a punch out at the plate for Adam!" 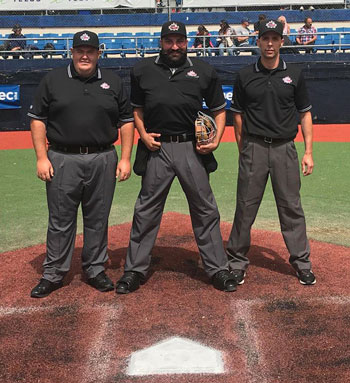 FAVORITE PIECE OF EQUIPMENT OR UNIFORM?

"I wear a patch on one of my polos for my mentor, who passed away from cancer in 2019. Wayne meant a lot to those of us "West Islanders" who began umpiring in the late 90s to early 2000s.

I love masks and customizing them. Some of my favorites are my Wilson Titanium with powder blue pads, and a newer Force 3 Defender. I'm currently searching to acquire the uber-rare Nike Titanium.

Anything produced by UMPLIFE is A1 in my book. Ray knows his stuff!"

HAVE ANY TRICKS OF THE TRADE?

"The reality over here in Quebec is things are mostly in French, and I am one of the few anglophone umpires active at the higher levels. I always teach young up and coming umpires to practice their French as much as possible. If an English umpire at least tries to speak French with coaches during the plate meeting, it earns respect that can be very helpful later on in the game if there is a need for a discussion on a play or ruling." 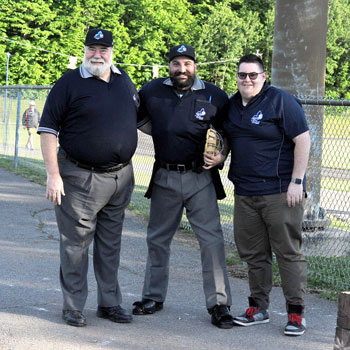 WHAT DO YOU LOVE MOST ABOUT OFFICIATING?

"There is no better place to watch a baseball game than directly behind home plate! I equally love the comradery among officials across the globe. I've acquired a few nicknames over the years: Bearded Blue, Monsieur Moustache, and Michel Lévis" 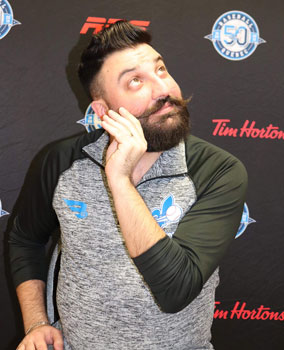