We Discover in Nashville the Top 5 Items NCAA Umpires Want

NCAA umpires attend 1 of 4 umpire clinics each year throughout the country. 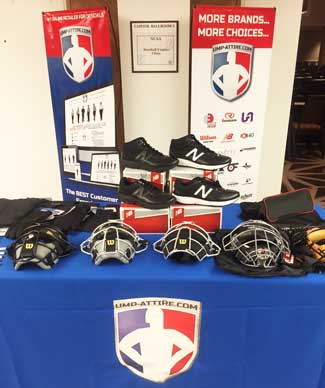 This year's southeastern US clinic was held in Nashville. It included umpires from several conferences including the ACC, SEC, Sun Belt and more.

We scored a great location at the Sheraton Downtown Nashville just outside the doors to the main meeting area. With too many umpire products to attempt to bring and/or sell, we brought and showed off new and exclusive products - as well as our new fresh-off-the-press banners.

We thought you'd be interested in knowing which new and/or exclusive products NCAA umpires were interested in. Here are the top 5: 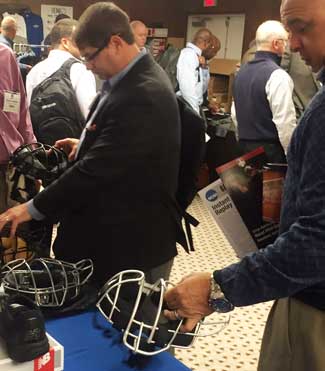 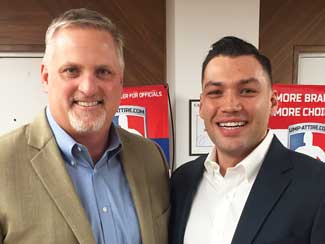 It was also great to see AJ Costaglio (great conversation on differences of metals in umpire masks), Tony Maners (wish we had more time to catch up), Brandon Cooper (former rep and blog writer for us who is rocking it in Zija and in umpiring), Jim Jackson (who I did not recognize out of his umpire uniform), Brad Polk, Hoss Matherson (thank you so much for your extra kind words), Ralph Diaz (enjoy those gloves), Roger Fulks (who is the smoothest plate umpire around), Keith Shartzer, Cedric Coleman, Kenneth Fitts (thanks always for your insights on umpire clothing and gear), Morgan Day (nice meeting and talking with you for the first time), Terrence Mobley (who was also there with Calling for Christ), Billy Williams (my favorite all-time customer) and others I can't think of at the moment. Thanks to all of you who stopped by, Sheraton staff (who were great) and the NCAA for allowing us to attend.

This is a great "crossover" jacket. Cool enough for those in between days and loose enough to allow a layer or two to stay warm. This is a lightweight windbreaker that is great for allowing me to adjust even as the weather changes midgame.

This umpire mask is awesome! It is very light and the wrap around pads add a layer of protection. I love this mask!

Awesome combination with the sleeves being able to be removed during hot summers in the Midwest.