Umpires Who Switched to Helmets

Thinking of switching to an umpire helmet, what veteran umpires affectionately refer to as "the bucket"? These umpires who switched from a traditional mask to a helmet share their experiences: 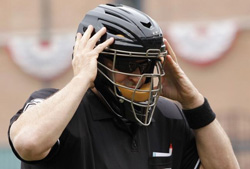 Ben Finan - My cage has been a great investment. Although slightly heavier, I get better vision and better protection. I am happy with my All-Star helmet; the catchers always comment on how sharp it looks!

Louis Santoni - After 3 concussions in two years with a standard mask, I had to switch to HSM for the protection. I love my All-Star HSM. Has great vision and had no problem adapting to it.

Steve Mackin - I had a couple concussions and switched last year - Wilson bucket, Takes a time to adjust, that's for sure. I find the weight, while heavier, is evenly distributed. Sight lines are superior to a conventional mask. I do like it, but it takes time however, I confess, I miss my standard mask.

Patrick Stark-Stonfish - I switched to the Wilson Helmet last season, due to some of the backstops being so close to home plate. Foul balls were the culprit...the ball would go up, hit the backstop & come back down on me. I would instinctively put my open hand over the top of my head...caught a couple, deflected a couple, & got smoke on the top of the head, by a few also....I love the comfort of the mask, plus it looks sharp!

Mike Dodds - I wore traditional for years then went HS 2 years ago, primarily because I wear glasses and it had more room for them. Masks with Wilson wrap around pads don't have enough room for my glasses. Liked the increased vision; direct shots hurt more with the HSM in my opinion and it was hotter and heavier. It was also a pain to lug around. Went back to an All Star ultralight traditional last year and love it. Using the All Star or team wendy pads it fits comfortably with my glasses on plus it is light and cool. Have taken many direct shots at the varsity level with no problem. The increased peripheral vision is the only plus of the HSM for me personally.

David McCracken Jr. - Went to the helmet for more protection but on really hot days I use the traditional mask. I carry both with me.

Joshua Sauter - Thanks to ump-attire.com, I purchased the new shock fx matte black titanium bucket about a month ago. I have worn it for a total of 3 days in cages with live pitching. Made the switch this year due to getting smoked in the ear off a sharp bouncer in front of the plate during fall ball. So far I LOVE the new bucket. The view is great and the titanium is light. Looking forward to heavy use this season. Don't see ventilation being a problem either.

Frank Barlow - I have both. I use the mask when the backstop has one of those curved backstops that come over top of my head (took a foul off of one of those and that was no fun).

Now you know what our facebook fans are saying - do your own compare and contrast of available umpire masks and helmets here.