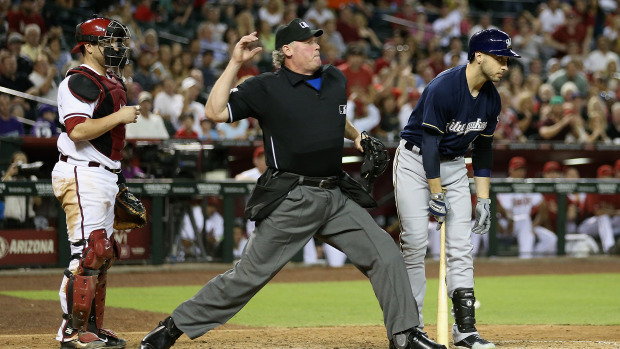 Mark, why did you become an umpire?

Tell me a little bit about your professional umpire career?

I started out in the Gulf Coast League when I was 20 years old. I had the normal progression of hitting all the levels, eventually reaching the ultimate goal of making it to the big leagues.  I had a lot of fun along the way and met a lot of great people.

When was it and why did you come up with this idea for an umpire ball bag?

My first year working noon games in the steaming hot summer Florida sun in the Gulf Coast League, it was hard keeping baseballs dry. I tried finding the best ball bags that could take care of this, but couldn’t find anything that worked. Not shying from a challenge of, I enlisted my Grandmother Bernie Jorgenson to design a new and improved ball bag that solve the issue. Grandma gladly obliged, went into action and designed an amazing ball bag that could withstand the torment of a hard worked game.

And what was the origin of the name "Dry-Lo"?

The Dry-Lo name took shape once we started to get the ball bags out there.  As I was distributing them in the minor leagues, umpires would ask other umpires where they bought the ball bags they were wearing.  The answer was always call “Lollo.”  I knew we had something and needed to come up with a name for the product.  One of the differentiating features (of many) of my bags is the property of keeping baseball’s dry.  A combination of using the word “dry” which will instantly tell you why my ball bags are better, and homage to my family name, the “Dry-Lo” was born.

How did you first go about manufacturing and marketing the Dry-Lo bag?

At first, grandma was happy that umpires loved her handiwork, but the demand became so overwhelming!  I had to find a way we could continue to deliver the highest quality ball bag, like grandma handmade, in much larger quantities.  I partnered up with Force3 because I really liked their products, and know they only manufacture the highest quality products using the best materials possible.  Plus, I knew that the company is run by umpires and former umpires.  They understand what we need.

You began working with Force3. Tell me about that relationship and how it started.

At the time, Force3 had only a few products in their lineup.  They knew about the ball bag and were actually developing one at the same time.  I approached them and asked them if they would be interested in carrying the Dry-Lo’s.  They agreed, but there was only one problem I told them…  Grandma couldn’t fulfill how many they wanted to buy.  We were able to strike a deal with Force3 taking over the manufacturing and ability to bring the Dry-Lo to all umpires.  It’s been a great relationship because they’ve been able to keep the product manufactured with the standards my grandma made them with, at much larger quantities.  Grandma’s a lot happier too, getting a relief from the sewing machine!

Who wears the Dry-Lo bag today?

I think the better question to ask (and start with) is, “Who ISN’T wearing the Dry-Lo’s?”  I’m very humbled at how many umpires wear and love my ball bag.  This year I found out that all MLB umpires received them to wear.  I think this happened in the past too, but I was told officially from a few that received them.  I’ve lost count as to who exactly wears them, but know they are at every level of baseball, amateur and professional.  I guess all the way from Little League through College D-1, Minor League Baseball, Independent Leagues, and MLB of course.

After your umpiring career on the field, you were hired by Minor League Baseball Umpire Development to evaluate Minor League Umpires. Tell me what this job entails.

For many years, I instructed at umpire school and enjoyed it very much.  I took great pride in teaching and helping young umpires throughout school, and eventually in the minor leagues.  During the offseason, teaching really fueled my love for that side of it I didn’t know I had. I couldn’t think of a better way to wrap up my career in umpiring than to continue teaching and helping young umpires progress through the system as a mentor, ultimately (and hopefully) attaining what I had experienced, which was umpiring on a big league field.

What tips do you have for umpires?

The best advice, as corny as it sounds, is to remember it’s a marathon and not a sprint.  Making mistakes should be embraced.  Learn your mistakes, gain experience, and when it’s time to shine, you’ll be ready.  You don’t want to go through thinking you’re perfect, then experiencing something you’ve never encountered before at the wrong time.

What suggestions do you have for umpires on their on-field appearance?

Besides having to decide if you wear one Dry-Lo or two Dry-Lo’s… Just kidding… Appearance is half the battle.  When you show up at the field and take it as an umpire, all eyes are on you.  If it’s the first time the teams have seen you, they’re starting to form an opinion about you.  If you look the part and act the part, you’re already ahead of the game.

Tell us something about yourself we might not know.

Besides rooting for the Buckeyes (O-H!), I enjoy hanging out with my family (and pet dogs) and friends in the Columbus area.  Sometimes you can find me jet skiing or hanging out around Buckeye Lake.  I’m also a (self-purported) master winemaker of Lollo Vineyards.

Great durability. Great protection from moisture. Holds 5 baseballs easily and comfortably. No issues with the opening being too small unless the bag is pulled taught over a tight belt.

These ball bags are great. I had the problem of sweating through my regular ball bags causing difficulty keeping balls dry. These bags have definitely solved that issue.