Keep your Shirts in Top Shape!

We asked our Facebook Fans what they do to keep their umpire shirts looking good all season long.  Here are their tips!

Lenny Fox - Don't keep them in a bag. Hang them up!

Van Gadberry -   Freshly pressed on the hanger, I can't stand a sloppy umpire, appearance is a big part of being professional......just sayin.

Coug Rogers - Roll them ... like the military.  Also buy a can of Downey's Wrinkle Releaser - keep it in your bag.

Mark C. Nemeskal - I have a garment rack that hangs in the rear of my Honda Odyssey from late March thru late September. I hang EVERYTHING there; pants, jackets, pullovers, shirts, and tees.

Justin Mann - Hang them up. Pants go to the cleaners to be pressed.

Martin Somers - I installed a garment rod in the back seat of my F150 and hang everything there - shirts, jackets, pants. No clothing in the bag.

Thanks to the above umpires for sharing their pointers on keeping their umpire shirts looking sharp. 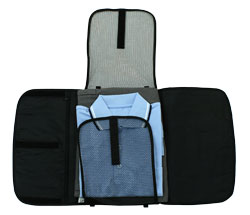 Great shirt. Did not shrink in the dryer. Nice, light and comfortable, especially for those long days on the courts.