Bob Frank, an umpire from Scottsdale, Arizona offered a great tip to preserve the letters on umpire indicators that make up the "Strike", "Balls" and "Outs" (and "Innings" on a 4-dial) from rubbing off.

"...Before I even used it in the field, I took some clear nail polish and covered the lettering (staying away from the wheel axes) to keep it from rubbing off. This seems to have done the trick and should help maintain the lettering longer than without the 'coating'."

Excessive wear can be an issue more so on black plastc indicators with silver or white painted letters (see the A3041, A3042 an A048P).

Metal indicators where the letters are simply raised and match the metal background in color (see All-Star Steel) do not have this concern.

Thanks Bob. Photo of him below. 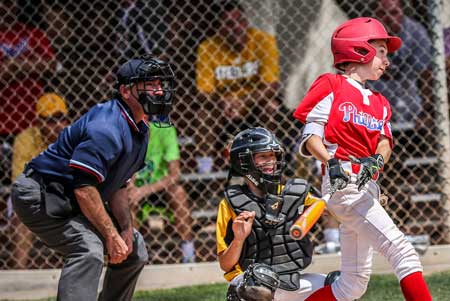 What other tips do you have for maintaining the longevity of your umpire gear?

Very comfortable and cheap indicator to use them on the playing fields and not get lost in any count of balls and strikes. I'm from Nicaragua.

Love the bigger clickers. Easy to read and fits snug in my hand. Happy with purchase and assistance from the team at Ump-Attire.com. Arrived in New Zealand on time as expected.