New Balance upgrades their field shoes every 3 years. The latest edition is the V3, the 2020 version launched this September.

The biggest change in the V3 is enhanced comfort. The memory foam midsole makes a dramatic difference. Here is a quick rundown of all the upgrades from the V3 in a side-by-side comparison to the V2.

You'll notice this in the honeycomb pattern of the V3 midsoles and in the thicker insoles. This is an upgrade from the V2 RevLite foam. Both foams are light, but the Fresh Foam memory foam is much softer, which will translate into more comfort for multiple hours of wear. 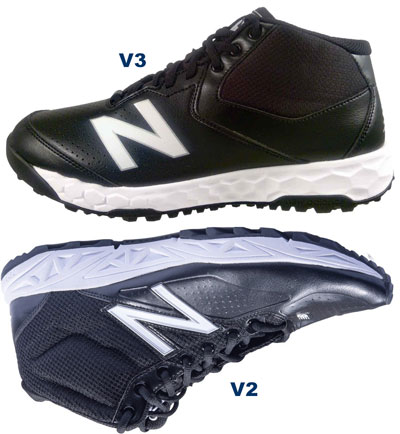 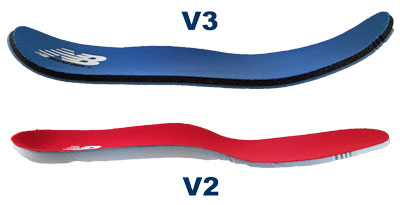 This was the first and most significant issue many of you raised with the V2 model. "There is too much mesh...It won't be easy to clean" we heard. The V3 subtracts more than 60% of the mesh from the sides of both the V2 low and mid-cuts. The mesh is now (mostly) concealed by your pant line. No doubt, the V3 will be easier to clean than the V2.

Easier to see than explain, the V3 traction pattern is a hybrid between the V1 (all "nubby" style not loved by many) and the V2. The V2 had traction more conducive to forward motion. The V3 is a hybrid of both. This should prove more versatile for the multiple directions you must move and on the many surfaces where you must officiate. So for dirt, grass and turf and for baseball, softball, football or lacrosse, the new V3 traction provides the best of all worlds. 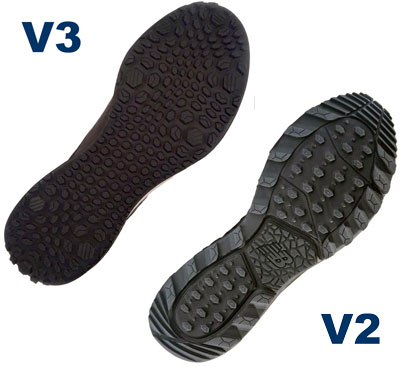 Most noticeable, the V3 has the "N" logo placed more aggressively on the front/side toe, rather than in the traditional middle-of-the-shoe location on previous New Balance models. The side logo has a smaller footprint, is no longer raised and has a silver outline on both the all-black and the black/white. The V2 model had a grey outline on the all-black version only.

The back logo on both the V2 and V3 is the "NB" logo. There the V3's logo is larger, but it is no longer raised as it was on the V2. Also, the V3 logo is the silver color that matches the logo outline color on the side. Before, the logo color matched the sole color. 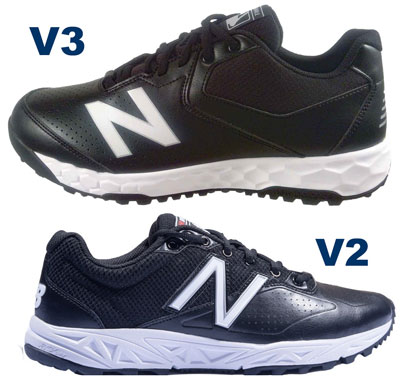 The reason the V2 added so much mesh in the first place was to reduce weight from the V1 model. For the V3, the shoe has the same weight as the V2 due to the addition of lighter materials elsewhere in the shoe.

Note: Originally, we may have mentioned the V3 were going to have a "lace cage". This was discussed in a prototype, but it was not added.

While New Balance kept the same 2 x 2 models - 2 all-black shoes and 2 black and white shoes; 2 low-cuts and 2 mid-cuts, the model numbers are different.

Tell us what you think in the comments below. Do you like the V3 or V2 better? What was your experience with the V2? What questions do you have about either one?

Yet another New Balance product designed to make umpires look and feel great after long days on the field. This shoe is the best yet and keeps on going long after I do.

These are the most comfortable field shoes. Full stop. True to size. Easy to clean. Comfortable even after a full day on your feet. Highly recommend.