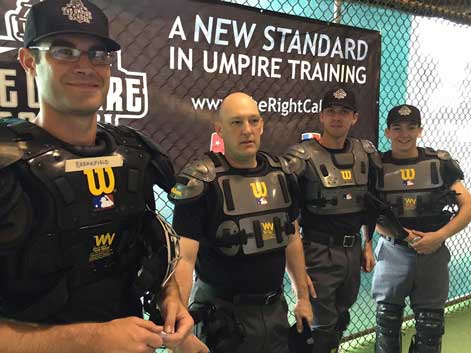 This is the 4th year we've served as Official Supplier to Minor League Baseball's The Umpire School. Each year, I have noticed a higher ratio of hard-shell to soft- shell umpire chest protectors worn in the student population.

My survey found 4 out of 5 students were wearing hard shells during their first day of cage work.

Wilson had the overwhelming share of hard shell umpire chest protectors (almost 3 out of every 4) with the following breakdown among them:

I did not count Wilson Gold vs Platinum vs Charcoal chest protectors. From memory, the ratio was close to 3 Golds to 2 Platinums to 1 Charcoal.

Whether you follow the trend or not with your preference of hard v. soft-shell umpire chest protector, know Ump-Attire.com has you covered with more choices and more brands than ever before.

Haven’t worn it yet but it is as described. Lite but seems to be protective in the areas I needed more coverage. The design is protective yet sleek. Fits well under my umpire shirt.

Perfect for use by a big guy like myself. Not too bulky yet long enough to add plenty of protection. Even on hot days, this product was not too hot and ideal for keeping me as safe as possible!

I use this for Fast Pitch Softball at a high level and have taken a couple off the chest/shoulder and this really does protect. Good padding and nice thin hard shell outside. Nice low profile, you don't get the Middle linebacker look and it's not too heavy. Lots of guys like the K2 protector but, this offers a lot more protection and not too much weight. Excellent value. Light weight, great fit, solid protection. Some guys didn't like the straps. I have no issues with them.