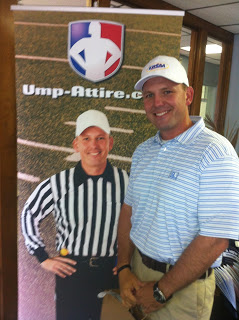 When Louisville-based College and High School Official Todd Skaggs helped us out with a photo shoot last year, the shot we used for marketing had Todd wearing a white hat.

Problem was Todd was not a white hat official. For that, the received quite a bit of good-natured ribbing from his colleagues.

This year, Todd is now the white hat on a Kentucky High School crew and was in to grab his KHSAA embroidered cap. We couldn't resist having Todd take a photo next to his likeness. Congrats to Todd on the promotion.

Love the Richardson referee caps! Great fit, comfortable, and they wear well. These are my favorites and the best I've worn.