Each year, we donate to a cancer-fighting charity through your purchases of select pink officiating items. Starting in 2022, the Kay Yow Cancer Fund is the charity we have selected to be the recipient of these donations.

Kay Yow was an 8-time NCAA Women's Basketball Coach of the Year and coached 38 years, where she amassed 700 wins. She was diagnosed with breast cancer in 1987 and had an on-again, off-again public battle against breast cancer for 22 years. She passed sway in 2009.

The Kay Yow Cancer Fund was officially founded on Dec. 3, 2007, "fulfilling Yow’s vision to support advanced research, extend the quality of life for those battling cancer, serve the underserved, and unite people." For more information on the Kay Yow Fund, please visit their website at www.kayyow.com. 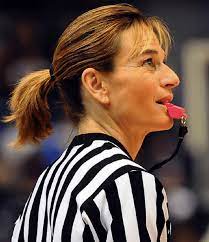 Shop our selection of pink items for sports officials and help us support the Kay Yow Cancer Fund.

Same quality as the yellow penalty flag with the black ball center. Good balance and distance on longer throws.

Great shirt, fits as advertised, and over my chest plate gear.

I'd been considering ordering this mask for 4+ years. Not sure why I waited so long. I absolutely LOVE it. Very comfortable & durable. I ordered it on Friday morning, it arrived on my door step on Monday afternoon, less than 4 hours before my scheduled game. That's what I call service. Highly recommend.