Much talk is given to the length of the umpire chest protector (neck to bottom) but not much to the overall size of the neck area. So I’m going to fill that void. 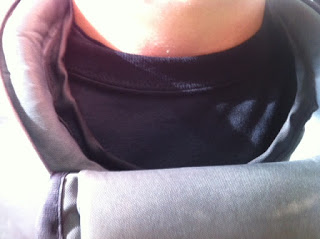 The skinny is that guys with big necks or big frames are going to have more umpire chest protectors that feel tighter than loose. And smaller guys are going to have the opposite. With a CP that’s too snug, it can be uncomfortable. But for one that’s too loose, there is a bigger problem. It could result in a gap in collar bone protection.

So if you’re an average to smaller umpire, listen up or bulk up. 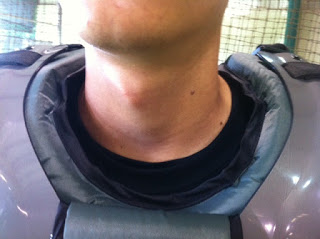 Take a look at the couple of images where small frame and neck guys are wearing the Platinum. Too loose right? These need to be either tightened to the max, a higher end-harness is needed that will allow these guys to wear them even tighter or a different chest protector is needed. (In these cases, they were tightened all the way. If you love your Platinum but the neck coverage isn't right, try a different harness.)

The moral of this story is that just as you try on your shoes to make sure they’re not too big or too small, do the same thing with your umpire chest protector. And don’t forget the neck area is just as important as its length.

Excellent product. In Nicaragua, they are already using this Wilson umpire chest protector.

Haven’t worn it yet but it is as described. Lite but seems to be protective in the areas I needed more coverage. The design is protective yet sleek. Fits well under my umpire shirt.

Perfect for use by a big guy like myself. Not too bulky yet long enough to add plenty of protection. Even on hot days, this product was not too hot and ideal for keeping me as safe as possible!